Home / Publications / Performance and Identity in Irish Stand-Up Comedy: The Comic ‘i’ by Susanne Colleary 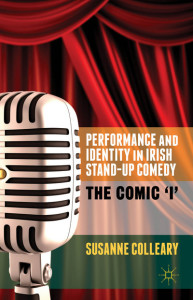 Performance and Identity in Irish Stand-Up Comedy examines the comic tradition of stand-up in and from modern-day Ireland. Using critical analyses of comedians including Tommy Tiernan, Dylan Moran and Maeve Higgins, Susanne Colleary’s engaging new book explores the role of stand-up in contemporary culture and examines the role of the staged comic self in performance. This book is suitable for students and scholars of international performance, and general readers interested in the interplay between comedy and society in contemporary cultural thought.

This publication was launched on 17th February 2015 at the Trinity Long Room Hub:

New Research Puts the Spotlight on Irish Stand-Up ComedyThe book explores the role of stand-up in contemporary culture and investigates the staged comic self in performance.

The School of Education hosted the launch of Performance and Identity in Irish Stand-Up Comedy: The Comic ‘I’ authored by Dr Susanne Colleary at a recent event which attracted a number of well-known Irish comedians and academics to the Trinity Long Room Hub. The book, which is published by Palgrave examines the comic tradition of stand-up in modern-day Ireland using a critical analysis of Irish comedians including Tommy Tiernan, Dylan Moran and Maeve Higgins.

The event was launched by Dr Eamonn Jordan, Senior Lecturer from School of English, Drama & Film in UCD, who highlighted the landmark nature of Dr Colleary’s research, saying “The Comic ‘i’ is ‘one of the first books to address aspects of popular culture in Ireland and it is the first book to deal with Irish stand-up comedy in any comprehensive fashion.”The event was introduced by Head of School, Dr Carmel O’ Sullivan, who commented on the significance of the work and its connection “to the vitality of the on-going arts research being carried out by the school”. The event was also attended by Dr Finola Cronin, Head of Subject (drama) at UCD as well as Dr Brian Singleton and Dr Eric Weitz of Trinity College.df
fadfaadfa
Tweet Pin It