From the Late Nineteenth to the Early Twenty-First Century 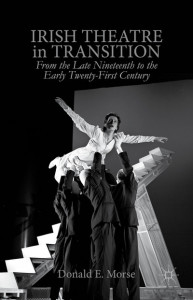 Irish Theatre in Transition celebrates the creative and richly vibrant Irish theatre which, since its inception, has always been in transition. Fifteen Irish theatre scholars, building on Christopher Murray’s foundational essay on the first hundred years, explore Irish theatre’s significance under the headings of ‘Engaging with a Changing Reality’ (of the Celtic Tiger, the sexual revolution, dementia), ‘Enhanced Theatricality’, ‘Reframing Transition’, and ‘Inventiveness and Expanding the Stage’ and discuss Irish plays in London, varied performances across Ireland in a year, Shakespeare, and Sam Shepard as Irish playwright.

The book is designed to show some of the myriad forms of transition: how this theatre reflects the changing conditions of a changing society and nation; how it innovates by returning to its roots or to abandoned but still viable theatrical conventions; how it continually reinvents itself and experiments with new media, and how it moves beyond the local and dares to imagine new audiences.

Donald E. Morse is University Professor of American, Irish and English Literature at the University of Debrecen, Hungary and Professor Emeritus of English and Rhetoric at Oakland University, USA. He has published widely in Irish Studies, including essays in scholarly journals and edited volumes around the world. Several of his books have been written or edited with the Hungarian Irish scholar, Csilla Bertha, and include More Real than Reality: The Fantastic in Irish Literature and the Arts (1991), A Small Nation’s Contribution to the World (1993), Worlds Visible and Invisble(1994) and The Dramatic Artistry of Brian Friel (with Mária Kurdi, 2006).

6. The Play within the Play in Select Contemporary Irish Plays; Csilla Bertha

8. Then Like Gigli, Now Like Bette: The Grotesque and the Sublime in
Mark O’Rowe’s Terminus; Ondřej Pilný

10. Snapshots: A Year in the Life of a Theatre Judge; Nicholas Grene

11. The Irish Play on the London Stage: An Overview from Independence to the Present; Peter James Harris

PART VI: ON THE RE-FOUNDATION OF THE IRISH THEATRE