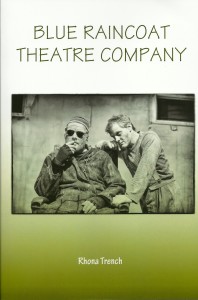 Since its foundation in 1991, Blue Raincoat Theatre Company is Ireland’s only full-time venue-based professional theatre ensemble and has become renowned for its movement, visual and aural proficiencies and precision. This book explores those signatures from a number of vantage points, conveying the complex challenges faced by Blue Raincoat as they respond to changing aesthetic and economic circumstances. Particular consideration is given to set, costume, sound and lighting design.

Influenced and informed by renowned international theatre makers such as Étienne Decroux, Jacques Copeau, Roy Hart and Anne Bogart, Blue Raincoat productions are generally non-natural in their sensibility, with a few notable exceptions. Productions such as the stage adaptations of Flann O’Brien’s The Third Policeman, At Swim Two Birds and The Poor Mouth, Samuel Beckett’s Endgame and Eugène Ionesco’s The Chairs speak to the artifice of the theatre itself, where actors and designers work collaboratively to reveal the function of the performance. W.B. Yeats’s one act ritual dramas demand physical, vocal and technical rigour and flexibility. This book explores the marvellously textured and complex nature of Blue Raincoat’s work, revealing the magic that results from their unique style of theatre making.

This book is available to buy online at Liber

Blue Raincoat: pushing the boundaries of theatre from WB Yeats to Étienne Decroux

The author of a new book on Sligo’s innovative theatre company explores their physical style of acting, engagement with the landscape and commitment to education

WB Yeats knew all too well the hidden gems to be found in Sligo and its hinterlands, a mythical place which boasts an enchanting, raw ruggedness that continues to capture the minds and hearts of many artists. Sligo’s Blue Raincoat Theatre Company reflects various aspects of place and space in their work, and their production of JM Synge’sThe Playboy of the Western World (1907), directed by artistic director Niall Henry, which runs in their resident space in The Factory in Sligo, literally and symbolically represents their unique position as Ireland’s only full-time venue-based professional theatre ensemble.

Since seeing Alice Through the Looking Glass in 2000 at the Peacock Theatre, the work of Blue Raincoat Theatre Company has captivated me enormously. The visual and aural imagination of the world of that production is still with me but it wasn’t until 2006 that I began to critically engage with the company.

Last summer they performed Yeats’s On Baile’s Strand on Coney Island in Sligo and in 2013 they performed Purgatory beside Meadbh’s cairn on Knocknarea. The audience had to embark on a kind of shared pilgrimage first before getting to the performance locations before they watched to see how the ritual performances penetrate the public (beach) and mythical (Knocknarea) sites in different ways.

Performing Yeats’s plays in a way which engages with the cultural landscape, once again probed my curiosity about how it is Blue Raincoat realise their work so with each viewing of their productions, it became clear that this book had to be written.

My forthcoming book looks at the work of Blue Raincoat from a number of concerns: their training, ensemble work, the use of the body, the theatre space, finances, directing, acting, set, costume, sound and lighting – conveying the complex challenges faced by Blue Raincoat as they respond to changing aesthetic and economic parameters.

When Blue Raincoat was founded in 1991, its practices worked against the traditions of Irish theatre which were predominantly text-based throughout the 1980s and 1990s. Yet those traditions were significantly influential to those then teenagers growing up in Sligo, a town rich in amateur theatre, music, poetry and dance in the 1980s.

In the late 1980s, Blue Raincoat actors had to travel outside of Ireland to train because their interest was centrally focused on the body first as a primary mode of making meaning in performance, and there was no formal training in this method in Ireland at that time. Since 1991, the majority of Blue Raincoat actors studied in Paris (or London when the school relocated there) in Étienne Decroux’s style of movement, a rigorous physical style which emphasises the expressive possibilities of the human body.

I believe that that kind of training supports the visual experience of the plays performed by Blue Raincoat and works by playwrights such as Beckett, Ionesco, Yeats, writer-in-residence Malcolm Hamilton, and their stage adaptation of Flann O’Brien foregrounds the actors’ ability to embody ritual, the bizarre, the fantastic and the surreal in captivating ways. But the company’s interest in physical rigour using the body as a visual text has developed alongside their interest in the other visual elements of performance including set and costume design, added to the importance of Blue Raincoat’s aural environments. Therefore I give considerable attention to design because of the ensemble nature of Blue Raincoat’s approach, which strives to unify the expressive qualities important to the perception and reception of their works.

As a lecturer in performing arts, I am forever aware of the traditional divide between scholarship and practice. Thankfully there have been a number of ways in which that dialogue has been opened up. Certainly the BA in Performing Arts at the Institute of Technology in Sligo, which specialises in theatre design, costume and acting and which is the only third-level institute whose design strand is partnered with the Abbey Theatre, is testament to the efforts made across institutes in providing opportunities for students in other areas [outside of acting] of the performance spectrum. Indeed lecturer in design at IT Sligo and former head of design at the Abbey Theatre, Frank Conway, remembers how theatre designers until the noughties had no option but to leave Ireland’s shores to do training in the field.

Synergies between industry partners and third-level institutes are imperative for students of all levels so that they can gain first-hand experience of the working world of theatre and performance. The relationship between Blue Raincoat and IT Sligo has seen former graduates employed by Blue Raincoat; the physical theatre module is taught by Kellie Hughes; Niall Henry has been the guest director for final-year design graduates; master classes in voice, sound and lighting is provided by Blue Raincoat; and IT Sligo’s graduation shows takes place in the Factory space.

Blue Raincoat’s effort to move their skills outwards can also be seen in the launch of their Theatre Academy in 2012, which permits workshops to be held at the Factory by international physical and voice theatre specialists. Though they were only awarded funding by the Arts Council in 2012 to run the academy that year, they see it as essential to continue to offer workshops for professional performers and charge a nominal fee for those that attend them.

Over the past number of years, funding and finances in the arts will help guide the decisions of any company and the book addresses Blue Raincoat’s development in programming, touring, education, administration and employee structures, which reflect this.

Blue Raincoat is an essential part of the theatre community in Ireland today. The future of Blue Raincoat will continue to depend on making interesting work for the stage and the book looks at the host of factors needed to enable and ensure this.

Rhona Trench is programme chair and lecturer in performing arts at IT Sligo. She has published widely on Irish theatre. Her book Bloody Living: The Loss of Self in the Plays of Marina Carr was published in 2010. She is vice-president of the Irish Society for Theatre Research. Her forthcoming book, Frontiers of Representation: The Theatre of Blue Raincoat, is published by Carysfort Press and is out in December.